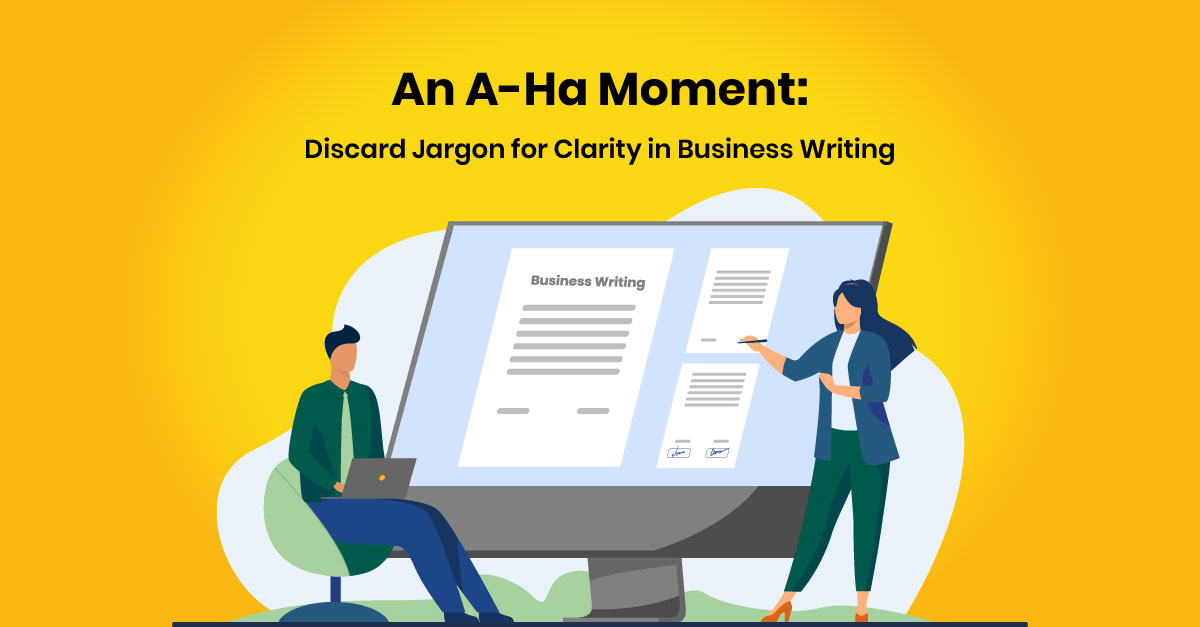 Business jargon can be annoying and pretentious. Here’s why you need to avoid it and opt for simplicity:

The man looks dapper, in a sharp suit and a bright red tie.

He is the company’s new life coach, hired for the day, and he is all set to make his first presentation to the employees.

He smiles at his audience, circles the podium in quiet contemplation and begins his speech.

“So, let me take a deep dive into our theme of the day. Are you a game-changer or a ninja, or an evangelist? Here’s a guesstimate. Half of you don’t think outside the box, nor do you raise the bar in your performance. One-fifth of you don’t have a Blue Ocean strategy and a roadmap for success. All of you have too many balls in the air. What is the solution? I will get back to an answer once you discover your core competencies.”

The audience is baffled.

“What on earth is he saying,” they ask each other. “What happened to plain English?”

This fictitious scene reflects what goes on in many forms of business communication today. The ‘inflated’ language (used by the life coach), which is now a part of “office speak” in many companies, is just not considered clever anymore.

It is stale, dull, and boring.

But, it was not always that way.

Phrases like ‘think outside the box and ‘paradigm shift’ coined in the 50s and 60s peppered the conversations in meeting rooms for many decades. Then came the expression ‘low hanging fruit,’ and soon, year after year, new business jargon found its way into the corporate vocabulary of the times.

To date, incorporating business jargon in sentences seems to be the easiest way to communicate as people feel that these words project intelligence, helps them fit in with their peers, and feel smart too.

But things are changing, and today, jargon is considered a pretentious, old-fashioned, and lazy way of expressing oneself.

What is Business Jargon?

Jargon is defined as a ‘specialized terminology associated with a particular field.’ For example, medical jargon can include ‘comorbid’ (two conditions co-occurring) or ‘tachycardia’ (fast heart rate). In contrast, police jargon would comprise phrases like ‘Code Eight’ (the SOS when an officer needs help immediately) and ‘Wolf Pack’ (a group of patrol cars driving together).

Jargon is used to convey messages that only those in the related field will understand. It began as an exciting way to communicate, but along the way, it lost its appeal.

Business jargon, too, gained popularity in many companies initially. They were appealing as they could convey a point quickly. But as time went on, jargon was used in thick clusters in every sentence, tedium set in for both readers and listeners.

Find a Better Way to Say Something

Clarity is the key to good writing, and jargon often makes it difficult to understand what a person is saying. Unless you have heard the expression many times, it is easy to misunderstand what is displayed.

Use Business Jargon Only When Needed

Good communication cannot do away with jargon entirely. There is a specific color and beauty in writing that uses jargon with care.

If a particular word picture appeals to you, use it once in a way to make a point. For instance, an expression like, ‘How is this development going to ‘move the needle’- may appeal to you as it brings to mind ‘a change in a situation on a particular goal’ and could conjure images of a speedometer in your car.

However, we must use jargon like this sparingly and only to create imagery in our writing.

Since business jargon is just not trendy anymore, make sure that you know which ones to avoid. Phrases like ‘win-win,’ ‘hit the ground running, ‘it is what it is can be put on your jargon blacklist if you have heard them too often.

Clear words will always communicate what you want to say in a much better way.

For example, in a sentence like ‘You need laser focus to get the job done, a reader who is not too sure what a laser does may not understand the phrase.

Good business writing is all about being ‘lean and clean. Sentences need to be kept short, and words should be as direct as possible.

Steer clear of popular buzzwords which may obscure what you want to convey.

At The End of The Day…

Are you stuck with a business buzzword you love but are not sure whether you should use it? When in doubt, cut it out.

Jargon is not bad in itself, but over-use can hamper the flow of good business writing.

Let’s not emulate the example of the debonair life coach in our story, whose addiction to corporate jargon may have caused him to deliver a lecture that failed to impress, empower or communicate anything to anyone in his audience.